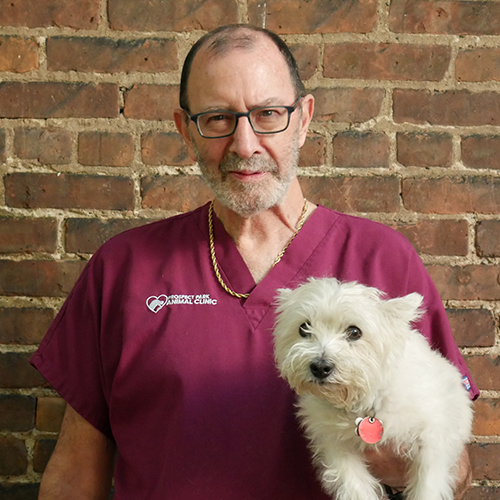 Dr. Silverman is a veterinarian and owner of Prospect Animal Clinic, and he’s been the owner since 1984. He’s been a New Yorker his entire life, but spent most of it in Brooklyn and Queens. He spent a brief period of time (4 years) on Long Island where he graduated with a B.A. in biology from SUNY at Stony Brook. He also studied abroad in Italy where he obtained his DVM degree from the University of Bologna.

Dr. Silverman’s inspiration for working with animals came from a TV program called Wild King, which was about animals in the wild. Watching this show, he felt a bond and continued to enjoy visiting zoos with wild animals, as well as petting zoos with farm animals.

Being from the city, his affinity for cats and dogs grew by exposure. Having to walk his or his neighbor’s dog always put a smile on his face. The natural progression was to assist in the well-being of these animals. After 43 years in the fields, the smiles still continue!

Dr. Silverman has interests in radiology, ultrasound, and surgery. Because of their ability to cut to the core of resolving diseases, these types of diagnostic or therapeutic modalities are among his favorite.

When he’s not at the clinic, Dr. Silverman enjoys cycling, playing tennis, skiing in the winter, traveling, playing the piano, and reading. He also enjoys spending as much time as he can with his wife, children, and grandchildren. 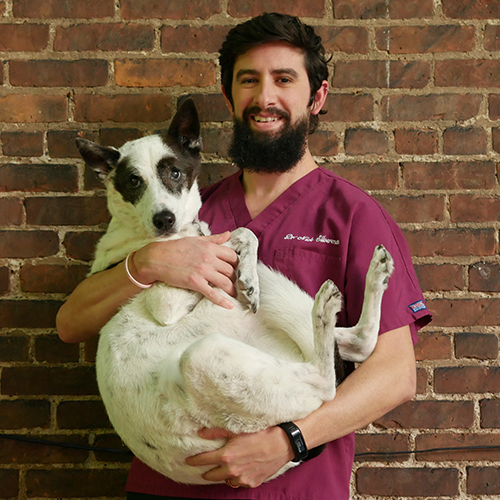 Dr. Nick was born in Brooklyn and has been a veterinarian at Prospect Park Animal Clinic since 2016. He’s an undergrad at Washington University in St. Louis and went to vet school at Ross University on St. Kitts as well as a clinical year at Purdue University in West Lafayette, IN. He also participated in a medicine and surgery internship at VERG in Brooklyn followed by a 1-year specialty internal medicine internship at VERG. After two years of internships, he came back home to work with his father at PPAC.

Dr. Nick spent much of his childhood in the clinic, so the veterinary world was always an integral part of his life. He was always surrounded by animals and he always loved animals, so a job where he could care for them medically was a natural fit. His favorite thing about working with animals is seeing them through various life stages and working his hardest to keep them healthy and happy for as long as possible.

Dr. Nick is reminded on a regular basis that he’s in the right profession because he is able to see animals recover from illnesses, or when he is able to help guide owners through difficult times in their pets’ lives.

Outside of work, he loves spending time with his wife Bess, 3 dogs Annie, Lucy, and Chicken, and cats Dexter and Deeny. He likes running, hiking, sports, politics, and farmers markets. 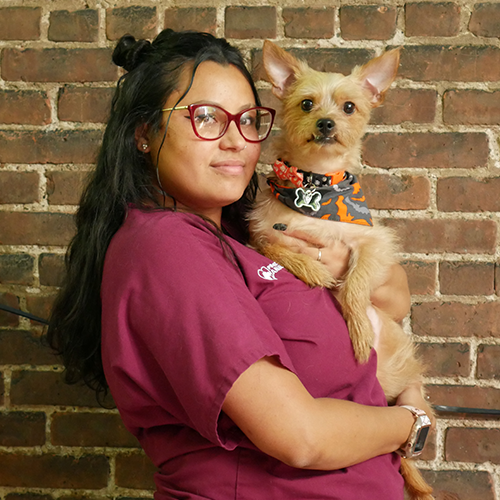 Raquel is the Office Manager at Prospect Animal Hospital.

She was born and raised in Brooklyn, and majored in environmental studies, as well as graduating from Skidmore College in 2015. Currently, she is enrolled in Penn Foster to become a veterinary technician.

Growing up, Raquel has all sorts of pets such as fish, turtles, iguanas, dogs, rabbits, hamsters – you name and and she probably had it! Raquel lost both of her parents at a very young age, and being around animals was the way she found to cope and fill the void she felt. Her favorite part about being able to work with animals is that they provide unconditional live and life-long friendships.

She knew that she has chosen the right profession when she received her first “Thank you” card from a client. It was the living proof that her passion for animals had been acknowledged.

Outside of work, Raquel is the youngest of three siblings and is the proud mom of a 2-year-old Chorkie mix. In her free time, she enjoys reading manga, watching anime, and drinking tea. 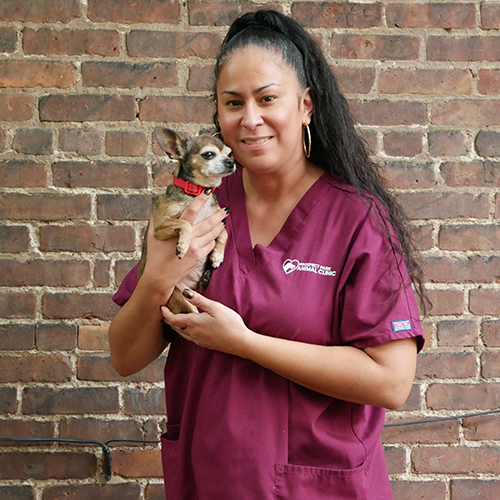 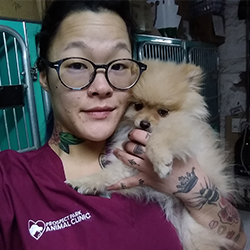 Chloe is a veterinary technician here at Prospect Park Animal Clinic. She was originally born in Korea, but she was adopted at birth and was raised in NYC.

Her grandmother was a marine biologist, so she was a huge influence in Chloe becoming interested in working with animals. Her mother also let her have any animal she wanted – so she essentially grew up in a zoo. She participated in two internships, one at the New York Aquarium and one at the Central Park Zoo.

Outside of work, Chloe is part of a small family with two older brothers. She likes to hang out with her friends, make intricate duct tape wallets and jewelry, and do anything involving the outdoors, such as hiking or picnics. 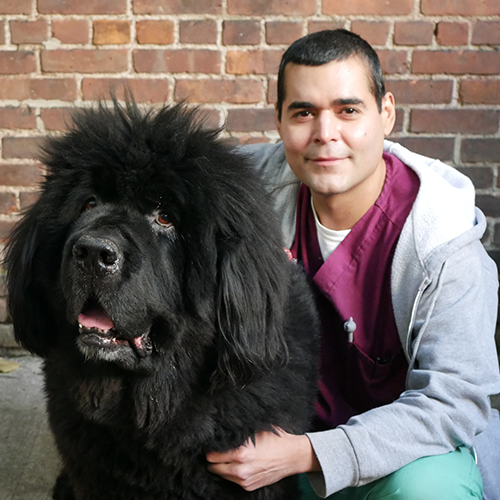 Patrick was born and raised in NYC where he grew up in Manhattan and now lives in Brooklyn.

He first got started in the industry doing TNRs after seeing all of the stray cats living on the streets in Brooklyn. He has also been a PPAC since 2015.

He currently lives with his 3 cats Griddle, Mow, and Oliver. Patrick loves rocking out to music, riding bicycles, and spending time upstate in the country. 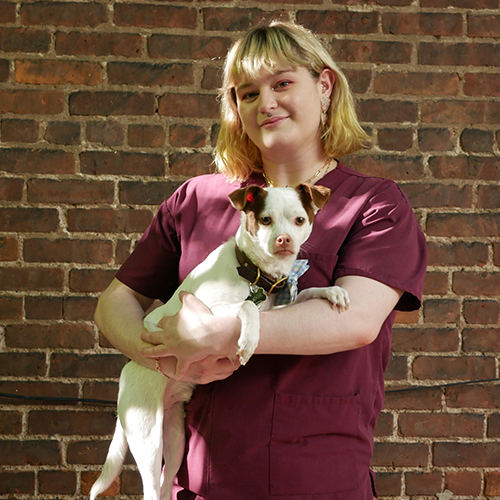 Nic was born & raised in North Carolina but moved to Brooklyn in 2016 start building a home with her partner who grew up here. She’s been a Veterinary Technician here at Prospect Park Animal Clinic since July of 2021.

Her career in the veterinary industry started in 2015 shortly after she graduated from college. Her favorite thing about working with animals is getting to help them and return the love they give to us. Nic loves getting to talk to people and help them learn how to best care for their pets so they can be together for as long as possible.

Nic knew that she had chosen the right profession when she was there to help her first patient fight through a difficult illness and getting to see her get better and see her for her first healthy appointment. It made her want to work hard every day to help keep pets healthy and to help them through their difficult times as well.

Outside of work, Nic lives with her partner and their 4 adopted fur-babies; two chihuahua mixes Pudge and Mochi, and their two cats Qwerty and Lieutenant Space Kitty. Outside of work she loves listening to new music and going to concerts. She also loves trying out lots of different crafts like tapestry weaving and jewelry making and is always excited to try something new that lets her work with my hands. 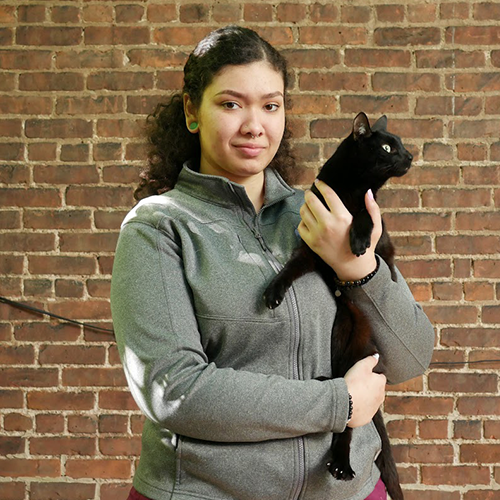 From the age of 8, Alexa had always known that she wanted to work in the veterinary industry. Her favorite part about working with animals is that they all have their own unique personality and that she gets to form a special bond of trust with each one that she interacts with. She knew that she was in the right profession once she got her job at Prospect Park Animal Clinic. She’s happy being surrounded by like-minded individuals and so many furry friends!

Outside of work, Alexa is the oldest of 10 kids and she had a 6-year old sheltie mix named Honey, who is the reason that she smiles. She loves to spend her free time drawing and writing spoken-word poetry. 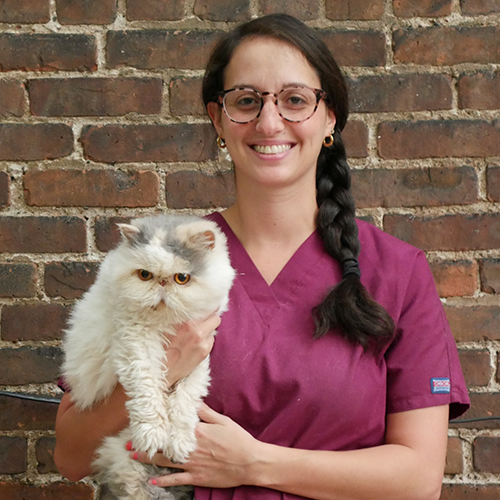 Lizzie went back to school to become a Vet Tech in 2016 and started working in the veterinary industry in 2018. Her favorite thing about working with animals is seeing all their fun personalities. She knew she was in the right profession when she was able to enjoy going to work.

She has a pretty big family- she’s a triplet (2 girls and a boy) and has another brother who is two years older than her. She recently had a son and she loves watching him play with his dad, his grandparents, his aunts and uncles, and their cat. She also enjoys playing soccer, especially outside in warm weather. 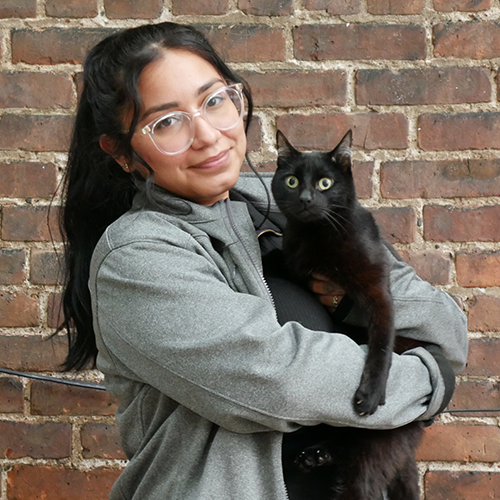 Kasandra started at Prospect Park Animal Clinic after working at a dog daycare. She was interested in furthering her education in working with animals and Prospect Park Animal Clinic allowed her to do that. Kasandra’s favorite thing about working with animals is getting to meet all of their different personalities. Every dog and cat comes with their own personality and she loves meeting them all!

She knew that she was chosen the right profession when she began to experience the gratitude that the clients show for the staff who has worked with their pet. She absolutely loves the feeling and appreciates the clients and their gratitude.

Kasandra has a dog herself, although she never really considered herself to be an animal person until working at the dog day care and seeing the dogs being picked up and the love they gave even to me and I wasn’t their owner. After that, she had to get her own dog and can’t imagine living without him now 🙂 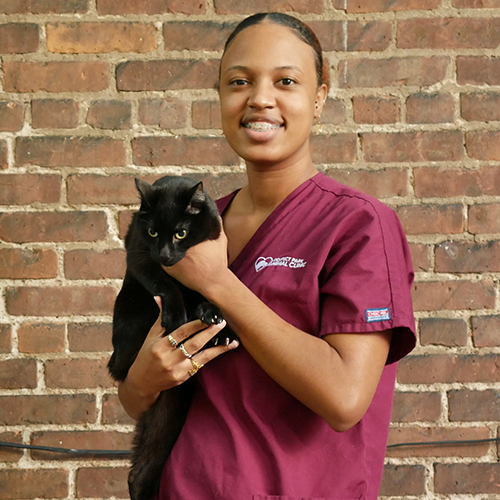 Ketema has been a receptionist with Prospect Park Animal Clinic since December of 2020.

She grew up in Trinidad and moved to New York back in 2010. Currently, she is attending Brooklyn college where she is pursuing a degree in chemistry. She is looking forward to graduating in December of 2022.

Ketema was drawn to the veterinary industry since her grandfather’s love for animals rubbed off on her. She grew up taking care of ducks, chickens, rabbits, goats, dogs, parrots, turtles and hamsters. Her family had a mini-farm at their house.

When she’s not at work, Ketema likes to travel, watch movies and have game nights with her friends 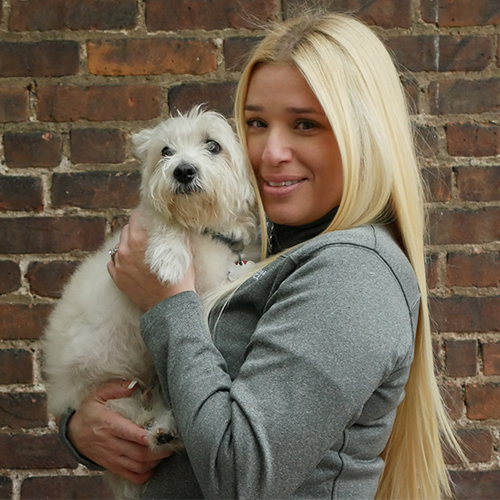 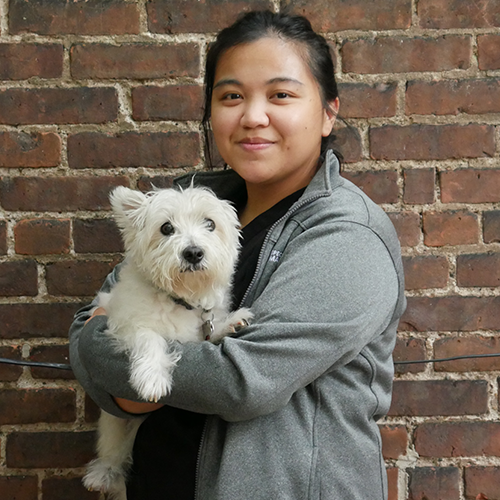 Aliaza has been a receptionist with Prospect Park Animal Clinic since June of 2021.

She grew up in San Jose, California, and moved to New York in 2019. She began working in the veterinary industry because she wanted a change in her career from being a caregiver for people with developmental disabilities.

Her favorite thing about working with animals is that she can help educate their owners on preventive care, thus resulting in happy and healthy furbabies. She knew she was in the right profession when she would get clients thanking her for helping them set up their first appointments and making their pets feel comfortable at the vet.

When she’s not working behind the front desk, she loves to spend time with her partner going on food adventures, music festivals, and binging tv shows.

We’re located directly across from Prospect Park and not far from the F-Train.